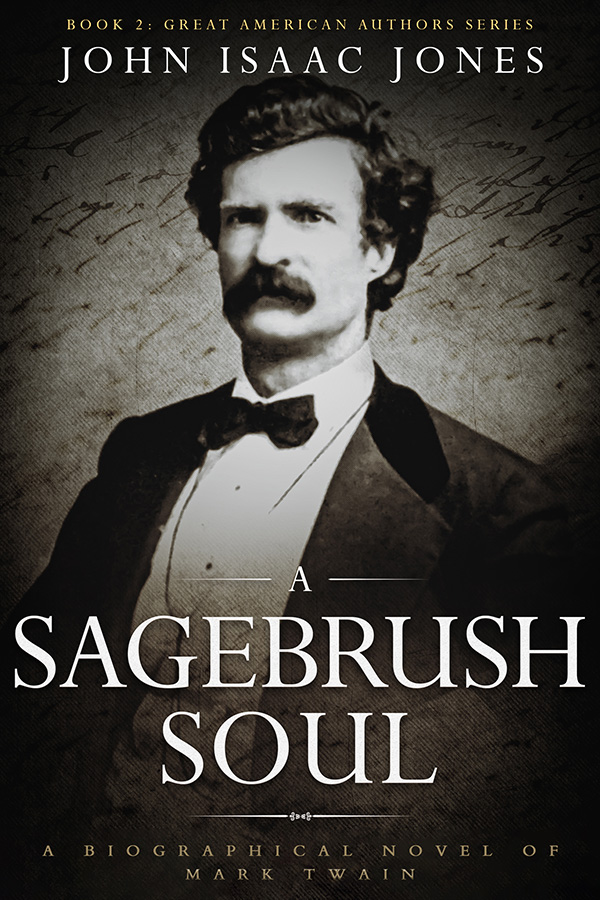 A Sagebrush Soul, a biographical novel of American humorist Mark Twain, is the second volume in my Great American Authors Series. The first was A Quiet Madness, a biographical novel of Edgar Allan Poe which was published in August of 2020. The Twain book, which has been in the works for over a year, is about half written at the moment. Hopefully I will have it finished by the end of 2022. I will keep you posted.

Following is an excerpt from Chapter 1 of A Sagebrush Soul:

Two days later, Clemens and Orion were in the field picking cotton. They worked from early morning until dark, dragging the cotton sacks down the rows, closely watching the sharp hulls of the bolls so they wouldn’t cut their hands and selectively picking bolls that looked easy. By the end of the day, they had picked just over 100 pounds of cotton.

At the dinner table that night, Jane, who was raised on a cotton farm, had a comment.

“Only 100 pounds?” she said. “Why I used to pick that much cotton before lunchtime.”

“We did the best we could,” John said.

“Tomorrow, I’ll go pick cotton,” she said. “The three of us, if we work at it, should get it done in four or five days.”

“Mrs. Clemens,” she said. “You can’t go picking no cotton in your condition.”

“Don’t tell me what I can do, Delrina,” Jane said. “I was picking cotton for my daddy in Kentucky when I was twelve years old.”

“When I had Benjamin,” she said. “I worked right until two hours before he was born. The work didn’t bother me then, why should it bother me now?”

“Maybe Delrina is right,” John said finally. “It might be best if you let me and Orion pick the cotton.”

“No! I know my abilities better than either of you. Tomorrow we’ll get up each and go to the field. The three of us should have all four acres picked in four or five days.”

The following day, Jane, her husband, and their son Orion were in the field picking cotton. Jane, like Hezekiah, was an expert at picking cotton. On the first day, they picked just over one acre with Jane accumulating more cotton in her bag than the other two combined.

That night, at the dinner table, John asked about her health.

“I’m fine,” she said. “I had forgotten what I good cotton picker I was. We should finish this in the next few days.”

Over the next three days, the three managed to pick the remainder of the cotton crop. On the afternoon of the third day, they started on the last row.

Two hours later, the sun was going down as John, his wife and his son Finished picking the last row. Then, with Jane in front and John and Orion dragging two bulky cotton sacks behind them, they started for the house. Once they were out of the field and into the front yard, Jane suddenly stopped.

She put her hand to her head, then collapsed on the ground.

“Orion! Go to the house and get Delrina.”

“Oh Lord, Delrina said. “I was afraid of this.”

Moments later, the husband pulled his wife to her feet, then, with John on one side and Delrina on the other, they started across the yard to the house.

When they entered the sitting room, the other children, Pamela and Benjamin, were playing in the front room. Upon seeing their father and Delrina helping their mother, they were frightened.

“What happened to mother?” Pamela said.

Pamela started to cry as she watched the others lead her mother into the bedroom. Moments later, Jane was in bed. She lay quiet for a moment, then opened her eyes.

“I’ll get the doctor,” John said. “Orion, help Delrina with your mother. I’ll be back as soon as I can.”

Moments later, John was out the door.

“Orion!” Delrina said. “Start a fire in the cook stove.”

Orion left the room and went to the kitchen.

“You’re opening up,’ she said. “That baby is coming any minute.”

“Oh, Delrina!” Jane screamed as her face contorted in pain. “Here it comes!”

Delrina stood over Jane and held her hands tightly.

Then there was one final scream.

Delrina, who seemed to not hear, turned to Jane.

“Do you have an old shoebox?”

“I’ve seen my older sister do this. I hope it will work.”

Quickly, Delrina went to the closet and took down an old shoebox. After dumping the contents on the floor, she placed the newborn inside and started to the kitchen.

“Orion!” Delrina said. “You got a fire started in the cook stove?”

Through the bedroom door, Jane watched as Delrina went into the kitchen to the cook stove. She opened the oven door and stuck her hand inside to check the heat. Then, satisfied with the temperature, she placed the shoebox with the newborn infant into the oven, closed the door, then watched through the glass window in the door.

For several more seconds, she peered into the oven waiting for a response.

Suddenly, she heard the wailing of a newborn infant.

Quickly, she opened the oven door and removed the baby from the shoebox.

Quickly, she cleaned up the child, which was bawling his lungs out all the while, then handed the child to his mother. Moments later, the newborn was nursing quietly at his mother’s breasts.

“You saved him, Delrina,” the mother said.