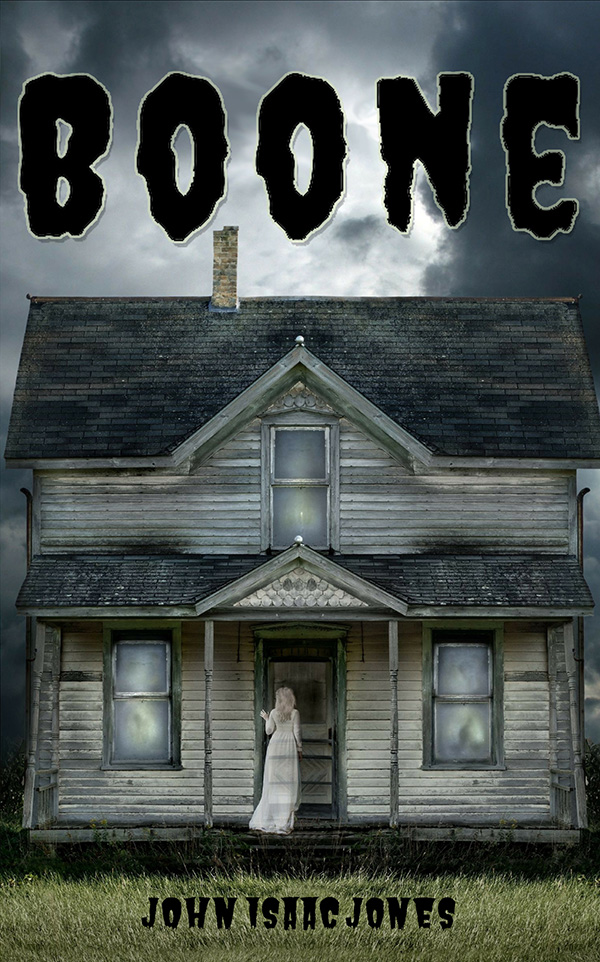 A snapshot view of an old Alabama farmer, seen through the eyes of a young boy, Billy, whose mother had been employed at the farm to nurse the terminally ill wife that the gentle farmer had loved his whole life. Well written, this short novella conjures up the expanse of the farm, the solitude of Boone, despite the numerous farm workers, and above all, Boone’s love for his Mary. Completely unsentimental, it is still very moving with a totally unexpected ending. A poignant tale, yet one filled with the wonder of a child’s recall.

When I was eight years old, I went to live with my mother in the backwoods of north Alabama at the Boone McCartney farm. My mother, a registered nurse, had been hired to provide 24-hour care for Mary, Boone’s wife, who had been paralyzed by a recent stroke. This is Boone’s story.

“Crossing over! I just finished Boone. This was my first book by John Isaac Jones. I was looking for a book to listen to while driving, I knew my drive was an hour so Boone at 50 minutes was a good choice. Boone was a touching and eerie story of a young boy’s experience living on a farm. The book takes you back to living in the deep south and a rural farm.

The book had several touching moments and the ending was a bit of a surprising twist. John I. didn’t disappoint. He had amazing description in vivid detail which is always enjoyable. I love ghost stories and John I. didn’t disappoint, as each character approaches death they had help crossing over from previous loved ones. After listening to Boone, I immediately went to his Amazon page to learn more about John Isaac Jones.

I was happy to learn that he has several books including Alabama Stories. I recommend Boone for readers that are interested in Ghosts & Death. - WritersNAuthors.com

“Touches your soul! Set in the 1940s in Alabama, this story is seen through the eyes of a boy whose mother is a live-in nurse for an elderly dying woman, Mary McDaniel. Mary’s husband, Boone, is still an active farmer and is doing his best to deal with his wife’s impending death. The boy, referred to as “Little Turd Knocker” by Boone, is curious about the farm and splits his time between helping out with chores, exploring, and playing with his circus set or pretending to be a cowboy.

Mary takes weeks to reach her final breath, so this story has time to ramble through the life Mary and Boone built. Even though we know at the beginning that this tale is going to end in death, it gently meanders along. Little Turd Knocker and his mother move onto the farm for the summer so Mary can be eased into her death as best as possible. Boone’s best friend, other than Mary, is his dog Nero, who attends him daily in the fields.

So, when Mary’s last breath arrives, I was ready for it. I wasn’t ready for what happened next. Oh my! I felt this story was ending on a sad disastrous note. Then in swoops the final scenes and this poignant, almost joyous ending lands on both feet. This is one of my favorite stories by this author.

For a short tale, Jones really pulls the reader in with imagery of the farm and phrases and attitudes that were common to the time and location. I nodded knowingly when Little Turd Knocker mentally noted how a sharp goose quill can poke through a pillow, making the experience of a feather-filled pillow realistic.

Then there’s cotton growing on many acres and hidden money and simple toys and the cowboy story craze of the 1940s. It’s a rich atmosphere that encapsulates these believable characters. – Dabofdarkness, Amazon reviewer