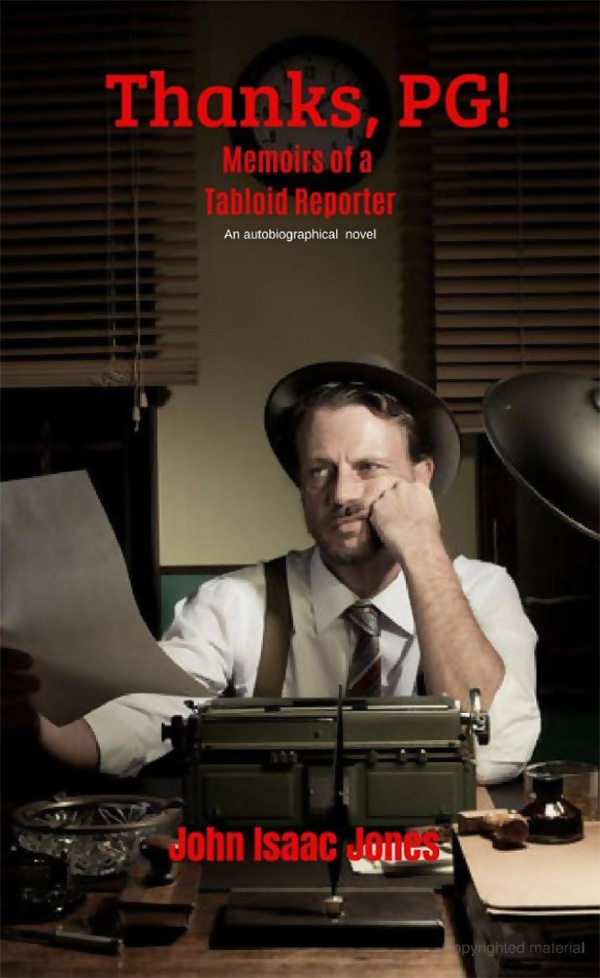 Thanks, PG!:Memoirs of a Tabloid Reporter recounts the life and adventures of reporter Billy Don Johnson during his 20 years (1975-1995) working for the fictional tabloid The National Insider. After his dreams of becoming a crusading journalist with daily newspapers are dashed, Billy throws himself into the wild world of diets, household tips, ghosts, UFOs, weird history, and celebrity scandal, all of which is designed to please Padrone Gallione (PG), the wonderful madman who was editor of the magazine. Within you will find untold stories from the lives of famous people, get an inside look at how tabloid stories are created and examine the origins of celebrity scandal in American journalism. Ultimately, this book is a tribute to the genius of Generoso Pope Jr., founder and publisher of the National Enquirer.

This volume is a fictionalized account of my years working for tabloid newspapers around the world. These include, among others, the National Enquirer, The Globe, News of the World in London, The London Sun and the Sydney Morning Herald in Australia. In a few places, the names were changed to protect the innocent and avoid lawsuits, but overall, each and every one of the stories are presented exactly as they happened.

“Extra! Extra! Read all about it! Thanks, John Isaac Jones! I loved this book! Beautifully written, edited, and oh, so entertaining! Thank you for the ‘insider’ look of what really goes on behind the scenes of tabloid journalism, and yes, readers, it IS journalism. I find it quite amazing that tabloid articles are more fiercely fact checked than any so-called ‘legitimate’ news in a ‘serious’ newspaper, gone over with a fine-toothed comb to make sure each titillating story is absolute fact and every word can be legally backed up. Has to be or the writers, editors, and publishers are in for a world of legal hurt. PG was quite the man. Brilliant and well educated with several degrees, including law and medicine, and John Isaac Jones is no slouch either. A fabulous writer, he could make a phone book interesting and entertaining! Thank you, Mr. Jones, for sharing a bit of your world with us! I would love to read more of your ‘tabloid memories,’ and I hope you will consider writing another memoir on the same subject. Readers, run, don’t walk, to purchase this book! I think you will be pleasantly surprised!” – Kindle customer

“A wild ride on the tabloid rollercoaster! Thanks, PG!: Memoirs of a Tabloid Reporter” takes you behind the tall tabloid tales to tell it like it is – and shockingly, to use a tabloid term, a lot of readers will be mightily surprised to learn that most of the tales were underpinned by a lot more facts than fantasies!

As a tabloid ace himself, John I Jones makes the valid point that you can’t accuse a Hollywood celebrity of fooling around behind his wife’s back unless you’ve got the goods on him, or else his lawyers will be licking their lips. And it took plenty of hard work and cunning – and $$ too! – to come up with the hot skinny!

The meat of the book is a thinly-disguised account of John I’s eventful career as one of the National Enquirer’s leading reporters, taking in not just a tour of Hollywood and Washington and encounters with a lot of famous names, but also shining a light on the amazing Enquirer operation set up by its legendary founder Generoso Pope Jr.

The Enquirer has always come in for plenty of flak from mainstream media, but the author is full of praise for what Pope achieved, painting a picture of a driven workaholic who pioneered an approach to stories that was eventually adopted by the very media who dismissed the Enquirer as just a supermarket gossip rag. It’s obvious John I. had a lot of fun on the tabloid rollercoaster, and you’ll have fun too if you buy a ticket to ride! – Square Eyes, Amazon reviewer in England

“Fascinating stories! As someone who worked in the tabloid business for more than 30 years, I can attest to the fact that Mr. Jones’s book is totally accurate - and frequently hilarious. Set around his adventures in the fictionalized National Insider - no prizes for guessing what magazine that really is - he spills the beans on some fascinating stories. Do the tabs make them up? No. But how they get the stories is fascinating.”. - Phil Bunton, retired National Enquirer editor