The tradition of Fa 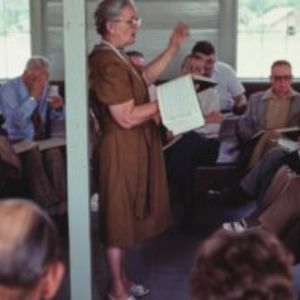 So La singing, so-called Sacred Harp singing, is as deeply embedded in the fabric of Southern culture as chicken and dumplings and “See Rock City” signs.

Known as shape note singing originally, Fa-So-La singing has its roots in the “country parish music” of early eighteenth Century England. Practiced mostly in small rural churches, the singing tradition was handed down from one generation to the next and, by the mid-1800s, it was known as Sacred Harp singing.

Around the mid-eighteenth century, the forms and styles of the English parish music were incorporated in America in a new tune book called Urania (1764), which led to The New Psalm Singer (1770). In 1835, an American named William Walker wrote a very popular book titled Before The Sacred Harp, which is still in use today.

In 1844, B.F. White and E.J. King published The Sacred Harp in Georgia, which came to be the tradition of shape note singing with the largest number of participants. With that, the music took on the name of Sacred Harp singing.

Fa-So-La singing is profoundly associated with books using the shape note system, which was popular in America in the eighteenth and early nineteenth centuries. This system of using shaped notes was developed to help the singer learn to read the music by sight.

The notes are printed in shapes to help the singer identify them on a musical scale. Two prevalent systems were developed, one using seven syllables (Do Re Mi Fa Sol La Ti) to represent seven musical notes and the other system using four shapes. Three of these shapes represented two notes with the fourth only being used once.

Fa is a triangle, La is a rectangle, Sol is an oval and Mi is a diamond. The publishing of the book “shape note” singing was very popular, the song books often using existing folk tunes.

Those who participate in Sacred Harp singing follow a specified form. They do not sing for an audience, but for themselves and other singers. The venue is set up with chairs or pews enclosing a hollow square with the sides dedicated to treble, alto, tenor and bass.

Participants always sang a cappella, without instruments, believing that the ‘voice was the instrument given by God at human birth’. There is no designated song leader, rather any participant may direct a song.

That person stands in the hollow square facing the tenor section, or melody singers, and calls out the number of the song to be sung. The song is started with an open palm in the down position and singing commences on the palm up motion. Someone sets a pitch and the singers sing the first verse using the shaped notes.

Then they sing the poetry, every one keeping the time with their palms raising and lowering with the rhythm.

Shape note singing, very popular in New England, spread to cities and urban and rural areas all over the country. However, despite the popularity of the shape note, the “better music” movement brought it under attack, led by Lowell Mason (A Charge to Keep I Have), who wanted a more scientific style of sacred music, which more closely favored the contemporary European music.

Before the Civil war, shape notes and their music disappeared from the Northeast and the Midwest, but still had a stable haven in the rural south. Much later, children in poor regions of Appalachia went to the singing schools and learned to read the shape notes at a very early age. In those regions the music was known as harp.

Today there is a wide resurgence of sacred harp singing which reaches beyond the American South to all areas of the United States and is popular in the British Isles, Australia, Ireland and many other countries.

Usually, most singing conventions are not held in a church building, but some churches host the ‘all day singing and dinner on the grounds’, which was popular in the middle of the twentieth century.

As a child, I often saw this sort of get-together at a church near my home. I recall vividly in my high school, a shy and quiet girl displaying for our class the art of shape note singing. I thought her very brave to stand before thirty teenagers who were disciples of sixties rock and roll and sing a recognizable tune with Fa So La lyrics.

To provide examples of Fa So La singing, I am including links to Terry Fell’s ever-popular Fa-So-La song and the Chuck Wagon Gang’s In Harmony

Audrey Brooks McCarver, currently a resident of Ripley, Mississippi, is a wife, a mother, a grandmother and an author. She likes Southern cooking, country music, old pickup trucks, Fa-So-La singing, afternoon walks down a lonely country road and fresh-cut watermelon with a pinch of salt. A native of Gadsden, Alabama, Audrey will be a frequent guest columnist on this blog and write about all things Southern.
PrevPreviousTembo Makaburi now available on audio!!
NextOrigins of the Poe BookNext