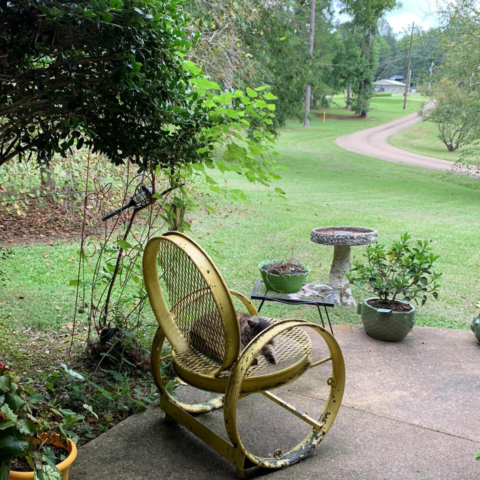 However, I am not retired from life and I am relishing  the freedom to harken to a whim and go sit out on the front porch with a cup of coffee or a glass of cold iced tea, a good book in hand, and just sit and soak up the sights and sounds of my surroundings.

From my earliest memories of growing up on Lookout Mountain in North Alabama, the front porch played an important role in everyday life.

It was the first place we went to in the morning to relax, a place to get out of the sun for a while when working in the garden and shelter from a sudden downpour.

At the end of the day after supper, when the dishes were washed and the food safely put away, it was our reward for a long day of hard work and play.

Those hours spent on the front porch are never about wasting time, it was about observing life.

When I was a barefoot child in the mid-fifties, I sometimes stepped on a sharp piece of rotted wood while playing with my sisters. The front porch was the place my Daddy would always take me to remove the splinter from my heel.

Then he would attack the splinter in my swollen heel with an alcohol-sterilized pocket knife while I wailed in pain.

“Sing!” he would say. “The more it hurts, the louder you should sing!”

Even to this day, I can still hear myself singing “Way down upon the Suwanee River, Far, far away…” at the top of my range.

The porch was used as a place to eat when the indoors was full of company, or stifling heat made the outdoors a comforting place to rest in the cool of the evening.

For me, the front porch is far and away the place to get lost in a canyon with Zane Grey; the light is the best there and the wide open vista represents a clean slate for the imagination to conjure up the scenes he is describing.

Further, the front porch is the primary vantage point from which a person could protect his or her property from mischief.

And what a perfect spot to sit with a date in the swing at night, near enough to the folks inside to satisfy convention, but also not easily seen (unless your little brother went out the back door and ran around the house to spy on you.)

A porch is a common individual’s psychological clinic. It’s a place to get away to for a few little while, if only to think, or reason, or plan…or reboot.

Front porches are found all over the world, in many shapes and sizes, plain or grand, tiny or tremendous. The word “porch” come from the Old French word “porche” and the Latin porticos “colonnade”, and is known by many names: Arizona Room, screened porch, sleeping porch, rain porch, loggia, veranda, lanai, sun porch and stoop.

All these designations refer to a covered shelter projecting in front of the entrance to a building. A Southern porch is often at least as broad as it is deep.

My porch is not a very deep one, but it can comfortably hold four chairs, a bench and a glider (all of which I have painted several times). When I go outside, I often “set up shop,” armed with a book, a phone, an iPad, a Nintendo DS loaded with the game Bookworm.

While enjoying my “porch time,” I am always alert to what is going on around me, especially if it involves wasps or hornets. I keep several hummingbird feeders ready for the season and I delight in watching them consume the free food.

If I have flowers blooming, the birds will just as likely drink from them. Hummers must feed about every ten minutes, so their waking hours are spent flying and eating.

The king of the front yard is the mockingbird. Atticus Finch had it right when he told Scout that it was a sin to kill a mockingbird. They don’t harm, but they provide exquisitely lovely and intricate song patterns that consist of whatever they hear: other birds, other animals, hammers striking, someone whistling for a dog.

The male sits high in a tree and tells the news to all, changing directions so that his warnings and admonitions can be projected in every direction.

Blue birds are often seen in pairs and their undulating flight calls attention to their presence.

The cardinal males are bright red, showy birds, while the female is a muted color. Redbirds often gather in large groups and eat seed that falls from trees or are scattered by the wind.

Then there are those birds who are only passing through briefly, the Indigo Bunting, the Gold Finch, the Cedar Waxwing, the Baltimore Oriole. Count yourself lucky if you get to witness a brilliant flash of blue or gold as dozens of these birds lift up into the sky, or if you see a small tree completely covered in Waxwings.

There are so many woodpeckers and I love them all. The Pileated is seen more in deeper woods than out in the open, but what a sight when he swoops down and around, looking like some long-extinct ancestor.  If you sit with a pair of binoculars and a bird book, you might get especially lucky.

Butterflies abound and all have a beauty of their own. Rarely you might see a hand-sized moth and more commonly the Luna moth. You will see the spiders, mosquitoes, dragonflies, but every thing living has a story and you can learn a lot just by observing each and every one.

When baby birds are being taught to fly, it is a common sight to see the parents attack a cat or dog or squirrel that wanders into the vicinity. Rabbits foraging for food are not unusual and a fox or deer shows up occasionally.

If I get up and walk a little ways, I can see the elephant ears–their broad leaves flapping in the gentle breeze–standing staid and flamboyant in the flower bed.

For me, the best time to be on the porch is during a rain. It soothes the senses and causes a deep feeling of well-being. However, when the lightning flashes and the thunder claps boom, its best get up and go inside.

Did you know lightning can jump ten miles on a clear day?

Thanks for listening….and keep smiling.

Audrey Brooks McCarver, currently a resident of Ripley, Mississippi, is a wife, a mother, a grandmother and an author. She likes Southern cooking, country music, old pickup trucks, Fa-So-La singing, afternoon walks down a lonely country road and fresh-cut watermelon with a pinch of salt. A native of Gadsden, Alabama, Audrey will be a frequent guest columnist on this blog and write about all things Southern.
PrevPreviousBaking Bread to Relieve Stress
NextInteresting Facts about William FaulknerNext