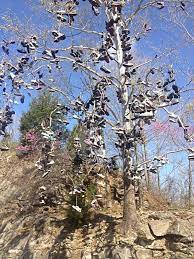 Let’s face facts. There are just some aspects of life that defy a satisfactory explanation. Without empirical evidence, many matters fall into the abyss of “opinion.”

For instance, why do people take a pair of shoes, tie the strings, and toss them onto a tree limb? I have heard from a reliable source (my son), that in the Marines it’s often done to commemorate one’s leaving the corps. A defiant gesture against those rigid, smelly, blister-causing foot coverings, perhaps.

As some have suggested, there could be a yearning to free their feet and go native and at the same time leave a visual ‘footprint’ on the sands of time.

Alabama’s famous shoe tree is a testimony to this curious phenomenon. Located on the north side of Highway 72, four miles west of Cherokee, Alabama, this popular roadside attraction has drawn thousands of admirers, picture-takers and curiosity seekers over the years.

There, several hundred pairs of shoes-tennis shoes, dress shoes and boots-dangle from the limbs of a lone sycamore tree which juts out of an embankment along the highway.

According to RoadsideAmerica.com, the Alabama shoe tree was first reported in 2008. This site also lists thirty-two such shoe trees around the U.S. and names several in multiple foreign countries.

Why do they exist? Frankly, no one knows. One such tree is known as the Tree of Lost Soles. Being the eternal optimist, I prefer Sole Survivor. How did the tradition first get started?

It may sound tongue-in-cheek, but maybe the first toe-box thrower was a muscular, stealthy type—an athlete with an old pair of sneakers. Or a disgruntled employee who, as an act of protest against a boss who was a heel, wanted to release their frustrations.

Maybe some jealous would-be beau swiped the foot wear of a rival for his love’s affections and flung them into forever. That would teach her that the upper crust did not care to be strung along!

It has been attested to that many who consign their old footwear to heavenly history inscribe on them their names, hopes, aspirations, predictions and even poetry.

It’s my opinion that people who engage in this practice usually do it just for the fun of participating, to see if one can achieve higher altitude and perfect placement and add their personal touch to posterity. Bragging rights, so to speak.

If a reader determines to see this showy shoe spectacle, please be advised that this timely tree is terrifically close to a bustling, busy thoroughfare and sudden stopping could result in catastrophic conclusion.

Best way to get a photo while traveling?

As the objective nears, slow down and take a picture from the car, then quickly return to the real world where a shoe tree is just a figment of an overactive imagination.

Thanks for listening… and keep smiling!

Audrey Brooks McCarver, currently a resident of Ripley, Mississippi, is a wife, a mother, a grandmother and an author. She likes Southern cooking, country music, old pickup trucks, Fa-So-La singing, afternoon walks down a lonely country road and fresh-cut watermelon with a pinch of salt. A native of Gadsden, Alabama, Audrey will be a frequent guest columnist on this blog and write about all things Southern.
PrevPreviousLatest review of The Bird of Time
NextSouthern Mama’s Hoe CakesNext