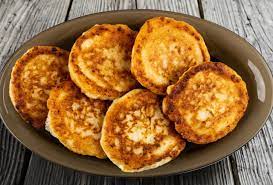 As a Southern girl I know full well that, on a cold winter morning, there is nothing on this earth like the taste of strawberry jelly and hot, buttered hoe cake bread.

My family grew up enjoying this tasty bread along with an assortment of companion foods: sorghum, molasses, syrup, and honey plus all manner of jellies and preserves.

Usually a meat such as bacon, sausage, ham, chicken or fat back was also served along with fluffy scrambled eggs. This menu works equally well for breakfast and supper.

Since our Southern version of hoe cake was always a staple, we probably did not concern ourselves with its origin. We likely assumed all of America ate the same foods we did.

However, like many childhood beliefs, this has proven not to be the case. Apparently, the rest of the world didn’t get the memo. So, what is hoe cake (for the uninitiated) and how did it come to be such a desirable dish on Southern tables for so many generations past?

Hoecakes and honey are as American as apple pie and the popularity of this simple food quickly spread among settlers throughout Colonial America. Originating with native Americans, it eventually became a commodity eaten regularly by not only early white Americans, but slaves and European settlers as well.

George Washington’s Mt. Vernon table boasted a sumptuous and bountiful bevy of dishes from which to choose. One of his favorite choices was hoe cakes and honey. One guest offered the theory that the softening effect of the hot butter and honey made the food much easier for Washington to chew. In colonial times, hoe cakes were consumed throughout New England, Virginia, the Deep South and the Southwest.

American diplomat and poet Joel Barlow wrote about hoe cake in his 1793 poem “The Hasty Pudding”, calling it “fair Virginia’s pride.” Barlow also referred to it by other names: in New England, it was called Johnnycake (“a dash of pumpkin in the paste.”) In other parts of the nation, it was referred to as journey cake, ash cake, corn pone, spider bread, mush cakes, Injun bread and bannock.

Simple hoe cake was made with corn meal, water and salt. It was baked on the flat part of a hoe over a wood fire, hence the name. Johnnycakes and corn pone were somewhat thicker and may have contained wheat flour or added fat. Southern hoe cake was essentially a little corn meal pancake, brown outside and crispy around the edges.

These hoe cakes were often eaten with turnip greens or collards and, for those ‘in the know’, dipped in pot likker. Basically, these hoe cakes were fried corn bread made with only corn meal and water, but many cooks liked to use eggs and milk.

I have often eaten fried corn bread, and I frequently had corn meal pancakes growing up, but I have never cooked nor eaten anything that was cooked on the flat side of a hoe.

The Southern hoe cake, eaten by most of us Southerners for generations, is not a corn meal product, but rather a biscuit-like bread made in a skillet.

My recipe, which follows, was handed down from my mother and probably represents a chain of generational sharing in the family. My first piece of advice: put on an apron, one that covers the preparer. While preparing hoe cakes, believe me, you will want coverage. Also, have a damp washcloth and paper towels handy.

Add dry ingredients, work in shortening with (clean) hands, until well mixed. Add buttermilk a little at a time until you have a stiff dough. With floured hands, knead until it is no longer sticky. Put it into a greased, floured skillet and shape it evenly around the edges. Bake at 450 degrees until lightly brown.

Take it out of the oven with mitts and dish it onto a large plate. Let it cool, cut and butter, spread on your favorite jelly or jam and dig in!

Thanks for listening and… keep smiling.

Audrey Brooks McCarver, currently a resident of Ripley, Mississippi, is a wife, a mother, a grandmother and an author. She likes Southern cooking, country music, old pickup trucks, Fa-So-La singing, afternoon walks down a lonely country road and fresh-cut watermelon with a pinch of salt. A native of Gadsden, Alabama, Audrey will be a frequent guest columnist on this blog and write about all things Southern.
PrevPreviousAlabama’s famous shoe tree
NextReview of A Gathering of Old MenNext