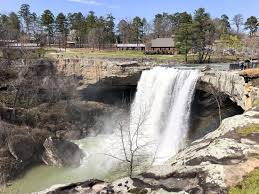 When I was young, my family often went to “the Falls” to admire its grandeur and to hike both above and below the falling water. The unfenced grounds were open to both the fearless and the fearful. We were kids. We knew little fear.

It was an exciting adventure, to go down the steel staircase, counting each step until your lead foot touched the ground. Then it was a cautious walk-run race to see who would be first to get to the cave behind the waterfall.

Usually there would be people clambering around the rocks or sitting and feeling the spray of the water, some enjoying a picnic meal in the shadowed, dank recess of the cave. On hot, sweltering days the misty, cool interior provided respite from the baking heat above.

There was easy access to the time-worn trails through the floor of the canyon, many people jumping off the huge rock into the soothing coolness of the natural pool at the bottom of the waterfall.

If the visitor wanted a more rugged experience, there was a trail down the other side. This trek was more demanding physically and vigilance was required for the rocky, often perilous climb down. And believe me, the climb up was no picnic either.

In hot, dry times, Black Creek becomes little more than a trickle, but in a rainy season, it cannot be contained within its banks and floods much of the area on either side, rising to the level of the footbridge and cascading wildly over the rocks, creating a noisy, frothy, glorious torrent.

For several years my husband, my sons and I lived within a quarter mile of the Falls and directly across the road from Black Creek. There was a large area near the falls that had never had a home built on it, so when someone built a home there, locals expected the worst.

Sure enough, when the rainy seasons came, the creek overflowed its banks and reached the road and the houses. Those stranded were rescued in a boat and brought to drier, higher land.

The park has fifteen miles of hiking and biking trails, of different degrees of facility or difficulty. Trails wind past caves, an indigenous fort, pioneer homestead, an abandoned dam, and civil war carvings.

Further, there is petting zoo. Sadly, last year the barn caught fire and burned and many animals did not survive. The barnyard animals were all saved. Plans are underway to construct a new barn and bring in more animals.

Created in 1946 and operated by the City of Gadsden Parks and Recreation, Noccalula Falls Park is on land owned mostly by former Gadsden Mayor R.A. Mitchell.

In 1909, aware that the land was going to be subdivided for houses, Mitchell bought 169 acres of land, intending it for a park.

In the second half of the 19th century, the Gadsden Land and Improvement Company ran a dance hall and tavern in a cave behind the waterfall. In an attempt to increase the flat area inside by using dynamite, they created a cave-in.

Underneath the falls was a wooden dancing platform which was used during, and maybe, before the Civil War through the early 1900’s. The dance floor was so near the waterfall, that dancers were enveloped in its mist.

There is evidence that Col. Joseph “Fighting Joe” Wheeler and his men were there during the Civil War.

The reader who is unfamiliar with the area might ask how the name is pronounced. “Knock-a-lew-la” with emphasis on the third syllable is correct.

At the top of the Falls there is a nine-foot bronze statue of a young Cherokee woman, perched eternally ready to plunge into the water below.

In the time-honored story, the Princess Noccalula was ordered by her father, the chief, to marry a man she did not love, in order to solidify the two tribes.

Rather than obey, the maiden took her own life by jumping into the abyss below.

In 1969, probably every Gadsden resident of accountable age was aware of the drive to raise money for sculptor Suzanne Silvercruys to create a statue commemorating Noccalula’s historic jump.

For visitors, the park features a host of amenities. These include cabin rentals, campsites and hookups. Several pavilions and meeting rooms are available for rent. On the paid admission side, the visitor will find a beautifully landscaped oasis, including a Botanical Garden, Animal Habitat, and historical buildings built in the late 1700’s and 1800’s.

When the train is operating, it goes on a mile-long journey through history. The campgrounds have two full bath houses with restrooms, a laundry room, library media room, a pool, and a meeting room.

Some of the principal celebrations held throughout the year are: Christmas at the Falls, Art on the Rocks, Smoke on the Falls, and the Barbarian Challenge.

Thanks for listening… keep smiling!

Audrey Brooks McCarver, currently a resident of Ripley, Mississippi, is a wife, a mother, a grandmother and an author. She likes Southern cooking, country music, old pickup trucks, Fa-So-La singing, afternoon walks down a lonely country road and fresh-cut watermelon with a pinch of salt. A native of Gadsden, Alabama, Audrey will be a frequent guest columnist on this blog and write about all things Southern.
PrevPreviousHonore de Balzac… the Greatest Novelist?
NextOld-Fashioned Butter RollsNext