“Listen only to imagination.” – Mark Twain 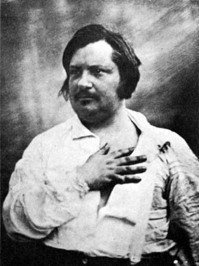 In the early sixties, a group of well-known literary pundits got together to decide who were the greatest novelists of all time.

Their conclusion was that Leo Tolstoy wrote the greatest novel in “War and Peace”, but they also decided that the French novelist Honore de Balzac was the greatest novelist simply because he produced so many good novels in his lifetime.

It was a well-deserved honor. Balzac not only had an incredibly prodigious output but a fire and ambition as a literary artist which is seldom seen in human history.

Born in Tours in 1799, Balzac’s father was a member of the upper class and had been a regional administrator during the French Revolution. The father had hoped that Balzac would enter the legal profession and, as a young man, he studied law first at the College de Vendome and later at the Sorbonne.

Despite his father’s wishes, Balzac was too restless and ambitious for such a staid profession and, in 1819, at the age of 20, he announced he wanted to be a writer. With that, he moved to Paris and installed himself in a shabby garret at 9 rue Lediguiéres.

As a chronicler for local magazines on social and artistic subjects, Balzac’s early writing attempts met with mediocre success although he did receive some recognition for the novel Les Chouans, a historical potboiler in the tradition of Sir Water Scott, in 1829. During that period, Balzac unfortunately tried his hand at business and bought a publishing house which failed to bring in printing.

After this and several other business ventures failed, Balzac was left with a heavy debt burden which would plague him until the end of his career. “All happiness depends on courage and work,” Balzac once said. “I have had many periods of wretchedness, but with energy and above all with illusions, I pulled through them all.”

In 1832, he began corresponding with a beautiful, wealthy Polish woman (she claimed to be a countess) named Eveline Hanska. Early on, he became enamored of her and asked her to marry him. She replied that she would marry him only if he became rich and famous.

With that, Balzac set off on a furious pace to write as many novels as fast as he could. His work habits were legendary. Balzac wrote standing up, dressed in a monk’s robe, drinking pot after pot of Turkish coffee. Many days, he would write for 15 hours straight, sleep for a few hours and then write for another 15 hours.

Balzac was close friends with French novelist Alexandre Dumas and he often visited their home to discuss literature. In the wee hours of the morning, Balzac, hungry and dog-tired, would visit and ask for food and a place to nap. Dumas’ wife would fix up a concoction of whipped butter and sardines that Balzac loved, then he would lie down for a nap.

Before he started to nap, he would tell Dumas’ wife: ”Now I only want to sleep for one hour, then wake me up.” After an hour, Dumas’ wife, knowing how he had pushed himself beyond the bounds of human endurance, would let him sleep for two hours.

When Balzac would wake up, he would see the time and curse Dumas’ wife and exclaim: ”You crazy woman, you let me sleep for 2 hours. I could have written a novel in that hour.” With that, he would storm out of the house and return to his garret to write for another 15 hours.

Over the next 17 years, he wrote an incredible 90 novels. About the time he proposed to Eveline Hanska, he decided to encompass all of his writings under a larger framework entitled “The Human Comedy”. This massive undertaking would include more than 2000 characters in 90 novels and novellas.

By October 1848, Balzac was world famous and wealthy and traveled to the Ukraine to try to win the hand of Madame Hanska again. Finally, after seeing that he was everything she had hoped for, she agreed to marry him. They were married in March of 1850.

Shortly afterward, Balzac wrote a friend: “Three days ago I married the only woman I have ever loved.” Two weeks later, he triumphantly returned to Paris with his new wife.

But the years of overwork and stress had caused his health to fail and, in mid-August of 1850, Balzac lay on his deathbed. French literary greats Victor Hugo and Alexandre Dumas were at his bedside as he lay dying.

It has been said that, as he lay dying in one room at their Paris home, his new wife–the woman he had spent his life trying to win– was in an adjacent room in bed with some stable boy she had picked up on the street. So much for true love.

At the funeral, Hugo delivered the eulogy. The great novelist noted: “Today we see him at peace. He has escaped from controversies and enmities….. Henceforward he will shine far above all those clouds which float over our heads, among the brightest stars of his native land.”