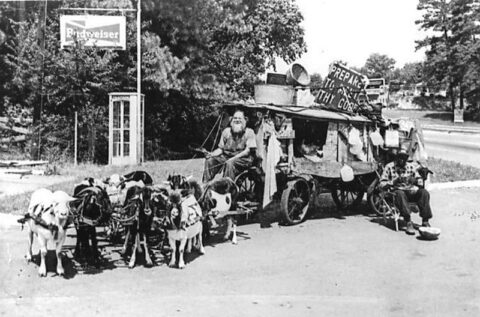 There are legends, and then there are LEGENDS.

Born in Sigourney, Iowa, on July 6, 1901, Charlie was a student at the local rural school which numbered only 14 students, all ages gathered into a single room.

“Charlie was never very bright,” said a former classmate. “I never really liked him all that much, to tell you the truth it was because he liked to keep to himself.”

At age 14, Charlie ran away from Iowa to New York City where he married a 24-year-old Argentine knife thrower. They had a baby boy and, to make some spending money, Charlie joined her knife-throwing act as a human target. It was also his job to keep the knives sharp.

After this venture failed, they moved back to Iowa and bought a farm, but after only a few years, the woman became unhappy, took the child and fled to parts unknown. The small farm he owned was lost in the Great Depression, but a local historian claims that Charlie gave up the land to satisfy a grocery bill that he couldn’t pay.

While cutting trees for the WPA in 1933, Charlie was struck by a falling tree and injured him so badly that, when he was found hours later, he was taken to a funeral home. As the undertaker was inserting the needle with embalming fluid into his arm, Charlie suddenly woke up and sat up straight on the mortician’s table. The surprised mortician passed out cold.

After this, Charlie could use his left arm very little due to the deformity from the accident. Out of pure shame, he didn’t want to be put on the newly-formed welfare programs created by Roosevelt, so, he decided he wanted to travel the world and preach the gospel.

When Charlie discussed the matter with his wife at the time, she gave him a firm ‘no.’ She was having no part of such foolishness. A week later, Charlie sold her to a neighboring farmer (whom the wife already had her eye on) for two payments of $500 each. Now Charlie was free to do whatever he liked.

Having always been very fond of his goats, he rounded them up and attached several to a wagon he had made from a railroad cart. He took a bed, a pot-bellied stove, lanterns, Robinson Crusoe and the Bible and hit the road. Along the way, Charlie gathered up various items he found along the way.

“He made some money selling postcards he had had made of himself,” said one historian. “Twenty-five cents or three for a dollar.”

He also sold or traded items he gleaned along the way. He was known to preach and pray in return for dollars and dinners. His sermons were liberally salted with cursing and profanity.

“He smelled awful!” was the most often expressed impression people had of Charlie. Having lived with and slept with goats for years and never bathing would be a believable reason. It was often said that people could hear the commotion of the goats and wagon and smell the pungent odor long before he could be seen.

When word got round that the Goat Man was coming, parents would gather up their children and their cameras and go to see him. With few other forms of family entertainment, his appearance made for an enjoyable outing for a family (provided they stayed upwind).

Charlie would camp where tolerant landowners allowed it. Each night he would build a huge bonfire and top it off with cut-up rubber tires he had harvested from his travels.

Ostensibly, this was done to keep the bugs away, but others surmised that this thick, smoky cloud brought the locals to see what was on fire. When they arrived and saw that it was Charlie, well, now, what a fine opportunity to sit a spell, chat a while and buy a few postcards —“25 cents apiece or three for a dollar”.

He didn’t have a big overhead, living on goat’s milk and items people brought to him. He accepted donations, especially from a little Georgia church that he started near Jeffersonville. And the goats would eat anything.

People remembering the sight of “Ches” McCartney and his smelly, clamorous entourage traveling down a road would be a sight they were not be likely to forget. Sometimes his herd numbered thirty goats, some goats pulled the unsightly sight from the front and some of the billy goats would push from the back.

If an animal was sick, or “off its feed”, he would hoist it up into the wagon for treating. The baby goats were often born in this wagon. One goat was observed with no front legs, and it hopped like a kangaroo.

Once while taking this tremendous load up Monteagle Mountain in a winter storm in southeast Tennessee, Charlie passed stalled vehicles left and right. That night he survived, he said, by taking extra goats into the wagon —a real Three Goat Night.

Around 1969, the Goat Man retired from the road; new super highways were frightening the goats and it was just time. After decades spent traveling in this fashion all over the South and most of the East, Charlie was calling it quits.

He admitted to having three wives and children with each and admits “there could be more. Who can I know?”

In 1984, Charlie became enamored with Hollywood actress Morgan Fairchild, so he set out to hitchhike to California and woo her and make her his own. He actually made it to Los Angeles, but, upon arrival, he was promptly mugged. This brought his wife-hunting to a halt.

Gene, Charlie’s son, traveled with Charlie for several years and never went to school. Charlie had photos of the lad dressed in clothes made of goat skins. After Charlie was mugged on Signal Mountain and eight of his goats killed, the father and son retired to an old family property near Jeffersonville, Georgia.

On the site, there was a concrete tomb which housed the remains of his father and step-mother. There was no electricity or running water. When the wooden shack burned down, Charles and Gene took up living in an abandoned school bus on the property.

In 1998, when Charlie had been moved to a nursing home in Macon (where he made a new girlfriend), Gene was found in the old school bus shot to death. The crime was never solved.

In less than six months, Charlie McCartney died in the nursing home. He and Gene are buried, side by side, in Jeffersonville.

In all his decades of travel, he visited forty-nine states, only missing Hawaii.

“My goats couldn’t swim that far,” he said. “And if they could, “they’d just end up eating the grass skirts off the hula dancers anyway.”

Thanks for reading and… keep smiling

Audrey Brooks McCarver, currently a resident of Ripley, Mississippi, is a wife, a mother, a grandmother and an author. She likes Southern cooking, country music, old pickup trucks, Fa-So-La singing, afternoon walks down a lonely country road and fresh-cut watermelon with a pinch of salt. A native of Gadsden, Alabama, Audrey will be a frequent guest columnist on this blog and write about all things Southern.
PrevPreviousZora Neale Hurston
NextHow I Learned to ReadNext