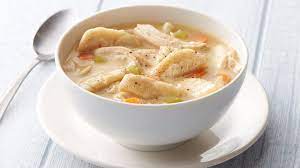 “My mom makes the best chicken and dumplings in the world!” exclaimed my eight-year-old granddaughter. Then, as if to console me, added, “Yours are second best in the world.”

Every Southern born man, woman and child from who were living before the fast-food era probably had a mother or grandmother or friend who made the best chicken and dumplings they ever ate.

Recipes have been handed down through generations and the traditions observed in the preparing and serving of this Southern comfort food which has stood the test of time.

To people of the South, there has never been a time when chicken and dumplings was not known. Do we know how this very popular dish came to be?

The actual history of chicken and dumplings is scarce, well, as hen’s teeth. The probable beginning given is that this pleasing plate of plump poultry and delicate, delightful dough had its start in the Antebellum south as a mainstay for harsh economic times. They did their best with what they had.

As is the case with any recipe, add, subtract, substitute, experiment: Make it your own. Here is my favorite recipe:

About 4 chicken breasts (or preferred pieces)

Cover chicken with water and cook until tender, about one hour. Remove chicken from bone and cut into small pieces. There should be enough liquid in the pot to make dumplings; if not, add small amounts of hot water with chicken bouillon cubes dissolved in it, or use canned chicken stock.

You can also use cream of chicken soup, diluted. Keep the liquid hot because the dumplings will take up the liquid and get too dry. Salt to taste.

Put two cups plain flour into a large bowl, add about 3/4 teaspoon salt. Work into the dough about 2 tablespoons of shortening until it is all worked in. Mix just enough ice water to make a dough.

Have a floured surface prepared. Turn out dough on this surface. Knead the dough with the flour until it is not sticky. Halve it for better handling. Keep using flour as you roll out the dough very thin. When dough is thin enough, cut into thin strips and drop into boiling liquid. Put on the lid and cook for 20 minutes.

Next, remove the lid. Turn these dumplings under the liquid and add the other strips. Let cook for another 20 minutes. Add more water if needed. Be sure to add black pepper, but not too much. Time to eat.

What should be served as accompaniment with chicken and dumplings? Bread is already in the dish, so it is not needed. I would suggest beans or peas and a relish tray with cut raw vegetables; carrots, bell pepper, cabbage, celery. Maybe a comfort dessert such as blackberry cobbler, but that is another recipe for another day.

So, if my grandchild thinks my chicken and dumplings are the second best in the world, I consider that a real, heartfelt compliment.

P.S. I am going to reveal a secret. If you just can’t dedicate this much time and effort to making the homemade dumplings, don’t despair. Go to the grocery and buy roll-out pie crust, then follow the rest of the instructions. It will save you some time and still look and taste authentic.

Thanks for listening… And keep smiling!

Audrey Brooks McCarver, currently a resident of Ripley, Mississippi, is a wife, a mother, a grandmother and an author. She likes Southern cooking, country music, old pickup trucks, Fa-So-La singing, afternoon walks down a lonely country road and fresh-cut watermelon with a pinch of salt. A native of Gadsden, Alabama, Audrey will be a frequent guest columnist on this blog and write about all things Southern.
PrevPreviousOrigins of the Poe Book
NextZora Neale HurstonNext